Gwon, sometimes as Won, is Ching's little chicken and a mascot who always is up on her head. She has supernatural power in her eggs; when a lizard eats Won's egg it transforms into Godzilla, and the eggs are also bombs. Gwon/Won is like a part of Ching cause Ching feel depresed if she isn't with her or she gets sick. In A Force Of Won, Tobe saw that Won's eggs are magic and he tried to catch one of her eggs.

When Wong is scared she lays an egg. Her eyes are always closed and she just opens them when she's scared. In the episode The Usual Ching, there are parts where Won doesn't appear because of Doga's sock that turns Ching evil, so Won doesn't make an appearance until Ching no longer has the sock.

Won also get easily scared of anything; Mio wants to eat Won and Tobe wants her egg. She seems to be a magical chicken due to her eggs, as she gives energy to Ching when she gets sad and weak when she isn't with her.

In Pucca Love Recipe, its shown Won when under the right conditions can lay golden eggs. 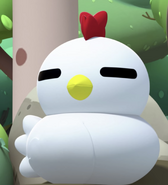 Add a photo to this gallery
Retrieved from "https://pucca.fandom.com/wiki/Won?oldid=21331"
Community content is available under CC-BY-SA unless otherwise noted.