Ho (호오 Hoo) is known as the Go-Rong Firestarter. As a master of fire, Ho can cook up any dish to perfection. He is also the youngest of the chefs. In the episode Chef Slump, he felt dishonored like his two brothers and went to the chef's challenge to prove their honor at the end of the challenge he is proven to know and speak the language of cats, he talks to Mio finding out that the restaurant was in danger and replying that Pucca can handle it.

In Dance, Pucca, Dance, he asks Pucca if she wants to dress like a princess, but he ends up in the costume himself. In episode Feud Fight, he blamed his two brothers for ruining the dish that they were cooking, but it turns out Dada was the one at fault. In episode Armour Plated Love, he gives Pucca a present to Garu with the other chef to impress Garu. In Noodle to the Stars, he was an alien and asked the people how they want the noodles, normal or infinite! In Hot and Bothered, he fell in love with Hottie, the queen of the lava and fire.

He is bald and wears a gray little hat. His clothes are light purple and he has a white chef tunic. 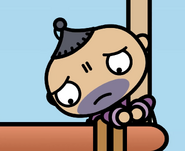 Ho with Hottie is only love interest
Add a photo to this gallery
Retrieved from "https://pucca.fandom.com/wiki/Ho?oldid=24328"
Community content is available under CC-BY-SA unless otherwise noted.